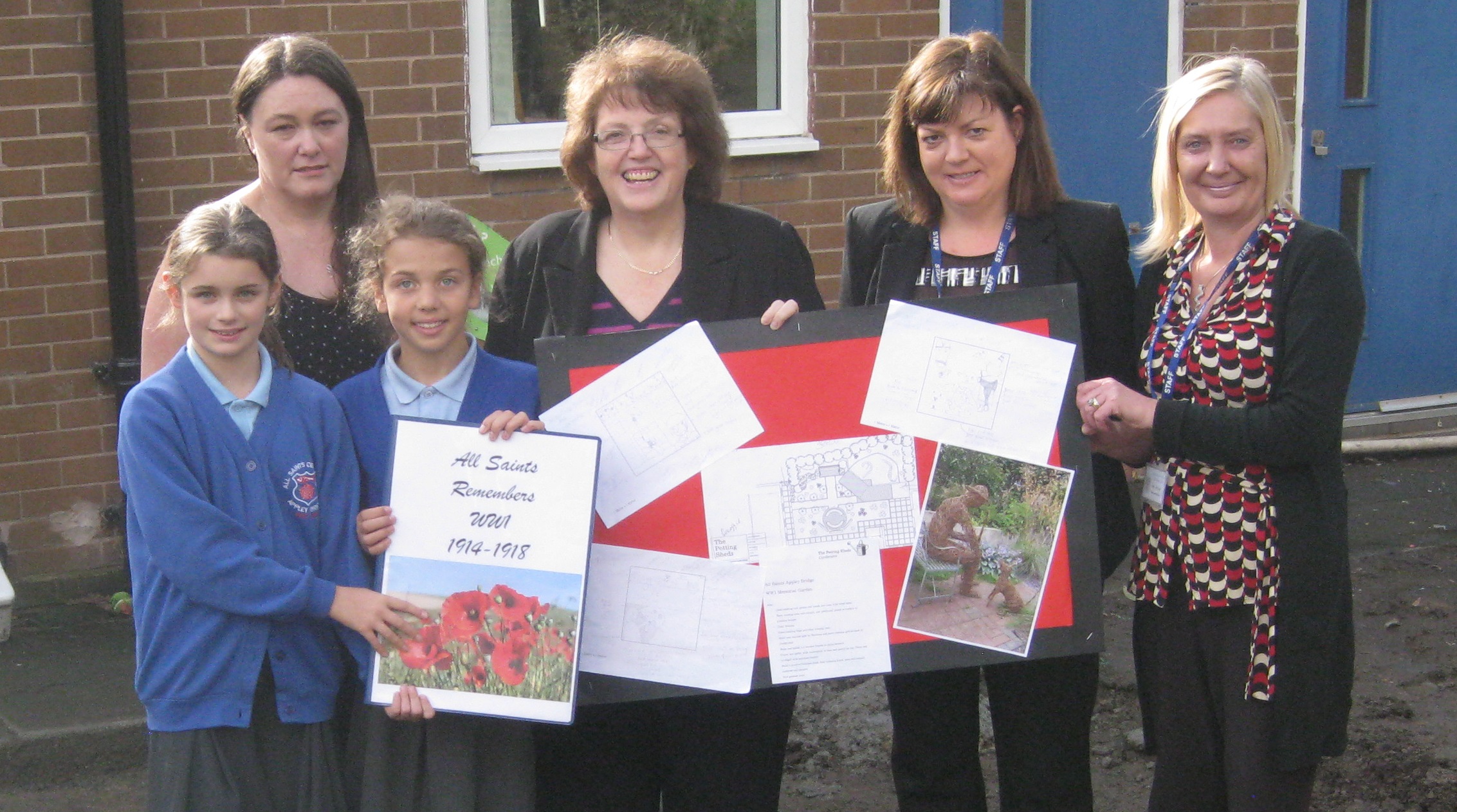 Teacher Jayne Hutchings was prompted into submitting a bid for the funding following a letter from MP Rosie encouraging local schools to apply.

This money has been used to turn a part of the school grounds into a remembrance garden which is also for use by the local community.

Coinciding with the Centenary of World War One this year, the memorial garden will officially be opened on Friday 7 November.

Whilst work was still under way when Rosie visited, she was shown the plans for the garden, including plants and trees, a new footpath and a seating area for reflection. There will also be a ‘willow man’, a statue of a weary soldier made out of willow branches seated on a bench.

Year 6 pupils Grace and Matilda spoke to Rosie about their involvement and how proud they were of the garden.

They are also looking forward to a range of activities the school is putting on including a visit to the War Museum in Manchester.

“It was fantastic to get down to All Saints Primary School to see the transformation taking place and where the Memorial Garden will be situated.

“This is a fitting tribute to our fallen heroes and a creative way to encourage our next generation to understand the sacrifices made 100 years ago, ensuring that we and they never forget.

“I am delighted the school bid for the funding and I congratulate Miss Hutchings and the rest of the staff involved on being awarded the grant.

“I had the pleasure of being given a breakdown of the plans and tour of the location with pupils Grace and Matilda.

“Although I am not around for the official opening, I am looking forward to visiting again to see the finished garden, and in particular to see the ‘willow man’.

“Linking this Memorial Garden with a wide range of activities including guest speakers to the schools, trips to the Imperial War Museum and exploring Great Britain during the wars are great ways of teaching and enlightening our future generations.

“Keeping alive in our memory the sacrifices of our fallen heroes is so important in helping future generations to understand our history and the tragedy which was World Wars One and Two.”

Rosie also went on a tour of the school, where she was given a brief history on the start of World War One in one class, whilst another class were busy working on ‘The Role of Women in World War One’.

“Being able to commemorate the century of World War One in building this garden of remembrance has meant a great deal to our staff and pupils. It goes beyond simply learning the facts on the page.

“I know the children were delighted to show Rosie how the garden is progressing and explain their role in making it happen.

“Through Rosie highlighting the availability of the lottery funding we have been able to give the children a unique learning opportunity but also the chance to build a lasting memorial a century later to each of those who sacrificed their lives for our freedoms.

“Building this remembrance garden has been a special experience for the entire school.”