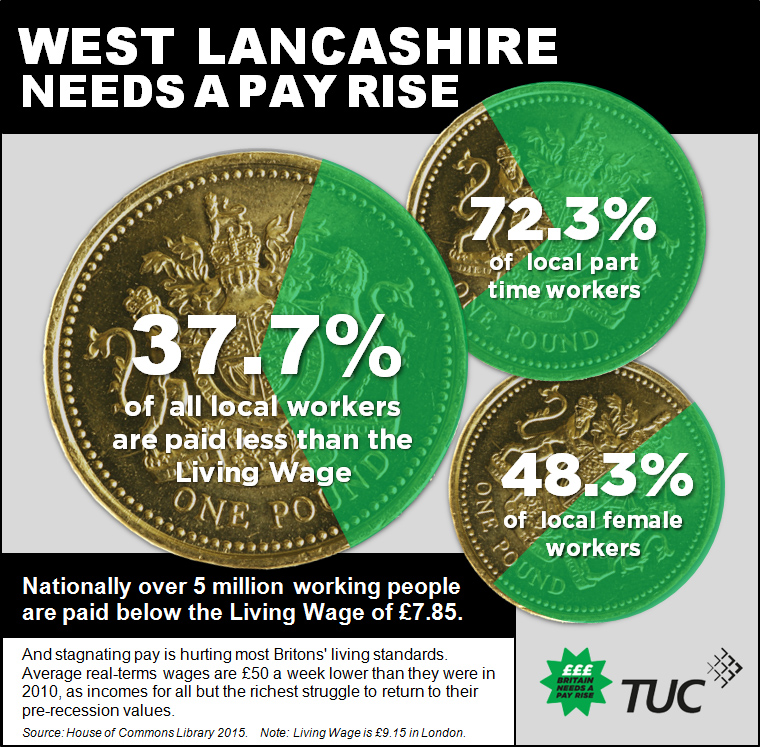 West Lancashire MP Rosie Cooper has expressed her disappointment with West Lancashire coming in the top five list of living wage blackspots according to the Trades Union Council (TUC). The TUC’s Fair pay fortnight ran from 16 February to 1 March.

In some parts of the Northwest two in every five jobs (42.1 per cent) are paying less than the living wage, the TUC has revealed as part of the Fair Pay Fortnight.

TUC analysis of official figures from the House of Commons Library shows that nationally on average one in five jobs pays under the living wage -; currently set at £9.15 in London and £7.85 across the rest of the UK -; but in some parliamentary constituencies many more people working there earn less than this.

Across Great Britain, more than five million people get paid less than the living wage. However here in the North West that figure rises to nearer one in four and in some parts is much higher. Blackpool South tops the list of living wage black spots in the North West, with 42.1 per cent of the jobs based there paying less than the living wage. This is followed by Heywood and Middleton (39.8 per cent), South Ribble (38.1 per cent), West Lancashire (37.7 per cent) and Leigh (36.7 per cent). Both Blackpool South and Heywood and Middleton feature in the top 10 of living wage black spots nationally, 7th and 9th respectively.

For working women the picture is even bleaker. Across the UK, 26.6 per cent of women are paid below the living wage, rising to 28.9 per cent here in the North West. In constituencies across the region, again the figure is much higher. In both Heywood & Middleton and Blackpool South, more than half of women are paid less than the living wage (53.9 per cent and 50.7 per cent respectively), followed by Leigh (49.1 per cent), West Lancashire (48.3 per cent) and South Ribble (47.9%). Three North West constituencies feature in the top 10 this time, Heywood and Middleton is 5th, Blackpool South is 7th and Leigh is 10th.

At the other end of the income scale, in some parts of the North West workers fare much better. Just 12.4 per cent of jobs in Blackley and Broughton pay less than the living wage, followed by Salford and Eccles (12.7 per cent), Manchester Central (15.6 per cent), and Crewe and Nantwich (16.5 per cent).

MP Rosie said:
“It is disappointing to see West Lancashire near the top of the list of living wage blackspots.

“I have campaigned in recent times for gender pay gap transparency and have been actively campaigning for the closing of the gender pay gap.

“There are far too many hard-working families in West Lancashire who despite being in work still find it difficult to make ends meet. High prices and falling real wages add pressure to the cost of living, which is why I am backing action to secure a living wage.

“We need to build on the national minimum wage to ensure that paid work keeps pace with the cost of living and therefore can ensure those in work are able to live, not just merely survive.”

North West TUC Regional Secretary Lynn Collins said:
“Extending the living wage is a vital step towards tackling the growing problem of in-work poverty here in the North West and Britain as a whole.

“Working families have experienced the biggest squeeze on their living standards since Victorian times, and these living wage figures show that women have been hit the hardest.

“Pay has been squeezed at all levels below the boardroom, and it’s time that the government and employers recognised that Britain Needs a Pay Rise. Without action on pay and the living wage it will take years to get spending power back into our economy.

“The number of living wage employers are growing rapidly, which is great news and unions are playing their part in encouraging more employers to sign up and pay it.

“But we need to see a far wider commitment to pay the living wage from government, employers and modern wages councils -; to drive up productivity and set higher minimum rates in industries where employers can afford to pay their staff more.”