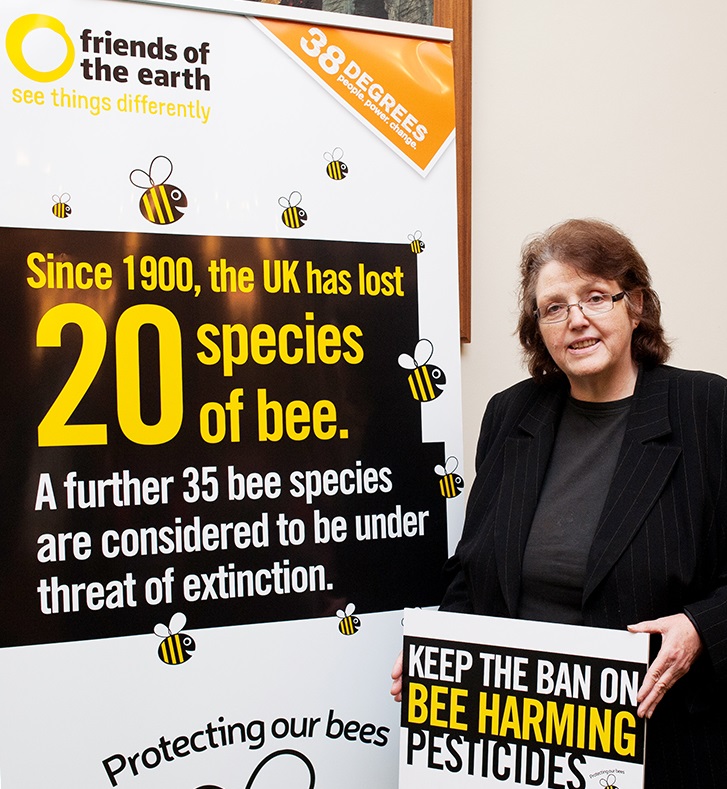 West Lancashire MP Rosie Cooper has committed to protect bees in the UK, speaking out against proposed plans to temporarily lift a ban on bee-harming pesticides.

MP Rosie made the declaration as government ministers look at requests to let dangerous pesticides – known as neonicotinoids – back into UK soil this autumn, despite clear evidence about how much damage they do to our bees.

Recent figures show that bees contribute £651 million to the UK economy each year – up 51% since 2007. For instance 85% of the UK’s apple crops and 45% of our strawberry crop relies on bees to grow.

Over 380,000 38 Degrees members signed a petition urging MPs to keep the pesticides off British fields. Thousands of emails were sent to MPs across the country by their constituents, asking them to speak to Environment Minister Liz Truss, urging her to keep the ban.

The ban was voted for by European governments in 2013 after numerous scientific studies found that certain pesticides were particularly harmful to bees. Since then even more studies have supported the need for this ban.

Rosie Cooper MP says:
“I’m committed to doing all I can as an MP to protect bees in the UK – and speaking up to make sure this ban on bee-harming pesticides is kept in place.

“This is an issue that lots of us in West Lancashire care about – so the government needs to keep the ban in place – and deny emergency authorisation for these pesticides this autumn.”

38 Degrees campaigner Megan Bentall said:
“It’s good to see so many MPs commit to keeping the ban in place.

“Hundreds of thousands of us are asking why the government is even considering allowing harmful pesticides back on British fields. We’re calling for Environment Minister Liz Truss and the government to keep the ban on bee-killing pesticides, with no exceptions.”

Friends of the Earth Bees Campaigner Dave Timms said:
“Bees are crucial for our food and farming. The scientific evidence is growing all the time about the need to protect our much loved bees from these dangerous pesticides. It’s vital the Government keeps them out of our fields and gardens for good.”