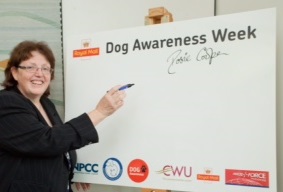 The session provided information on the issue of dog attacks on postal workers West Lancashire and a further understanding regarding what the change in legislation in England and Wales means to the police and postmen and women.

Rosie Cooper MP is working with Royal Mail in encouraging dogs owners to play their part in reducing the number of incidents.

Rosie Cooper MP said:
“With 28 attacks recorded across the West Lancashire constituency from April 2014 to April 2015 on postmen and women I am once again supporting Royal Mail’s Dog Awareness Week.

“Dog attacks are a significant issue faced by postmen and women, members of the public and indeed by myself and my volunteers when out leafleting.

There were 28 attacks recorded across the West Lancashire constituency from April 2014 to April 2015.

Members of Parliament, councillors, political activists and other campaigners are also at risk from dog attacks when out canvassing and leafleting in their local areas.

Royal Mail has published the results of a survey of MPs about their personal experiences of being bitten by a dog.

The survey found that politicians face similar risks of being attacked by a dog to postal workers when out canvassing or delivering leaflets. More than 40 per cent of respondents revealed they had an incident with a dog.

Dog attacks are a significant hazard faced by postmen and women on a daily basis. On average eight postmen and women a day are attacked by dogs across the UK with over 2,960 attacks taking place from April 2014 to April 2015 which is a 10 per cent reduction on the previous year, following a change in legislation and greater understanding of our dog awareness campaigns. Royal Mail welcomes the reduction but the number of attacks is still too high.

Shaun Davis, Royal Mail Group Director of Health, Safety, Wellbeing and Sustainability said:
“We are pleased that Rosie Cooper MP is lending her support to our important campaign.

“As we’ve seen from our survey, postal workers are not alone in facing dog attacks -; politicians experience the same risk of being bitten by a dog every time they canvass or deliver a leaflet through someone’s door. Nobody should face this hazard whilst simply trying to do their job.”

This forms part of Royal Mail’s wider campaign to reduce the number of dog attacks on postal workers and to encourage responsible dog ownership during Dog Awareness Week which ran until 4 July. However, postal workers are not alone in facing the risk of being attacked by a dog while carrying out their jobs. Politicians and volunteers may also encounter dogs when out canvassing and leafleting in their local areas.