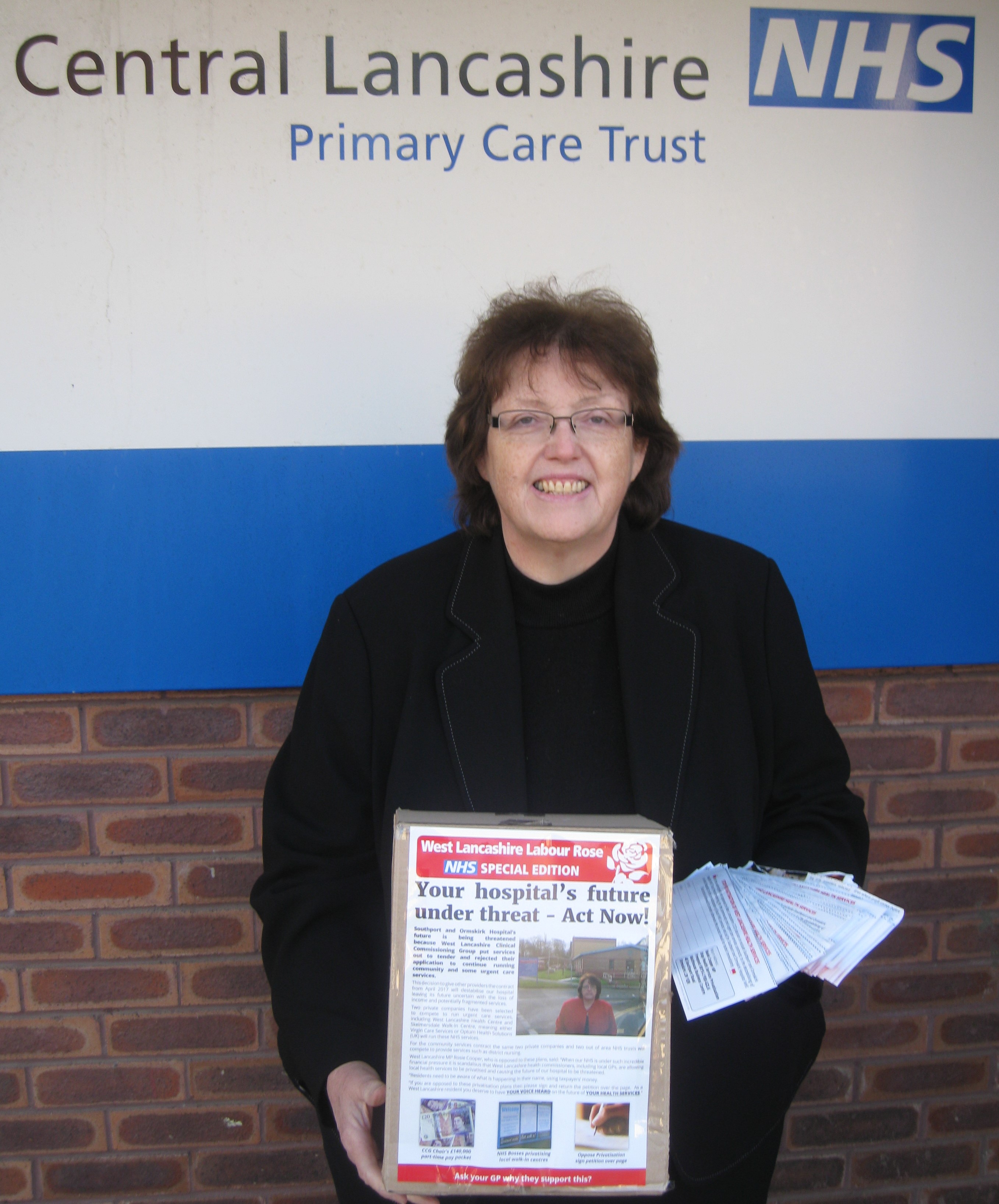 est Lancashire MP Rosie Cooper is demanding that West Lancashire
Clinical Commissioning Group (CCG) listens to the strength of residents’ opposition to the privatisation of local NHS health services and the destabilisation of the Southport and Ormskirk hospitals.

4088 residents have put their name to
a petition jointly promoted by MP
Rosie Cooper and 38 Degrees health campaigners expressing their outright opposition to the CCG’s decision to tender community health and some urgent care services.

MP Rosie understands from NHS England a decision on the new providers will be taken on 9 November 2016 by West Lancashire CCG in secret.  The bidders will then be notified.  Followed by a standstill period of 10 working days.  The outcome of the procurement will be publicly announced at the public board meeting on 22 November 2016

Rosie has presented her petition signatories to West Lancashire CCG and is calling on the CCG board members to listen to residents, having ignored all opposition throughout this process.

“West Lancashire CCG claim to have been consulting people.  Instead I have been doing my own consultation.

“The message is loud and clear.  Local residents and many doctors don’t support the actions of the CCG taken in the name of West Lancashire residents.

“Given the strength of opposition, these residents deserved to be heard.  They don’t want their NHS privatised.  Nor do they want to see their local hospital destabilised by the decisions of local GPs.

“There has been a real lack of openness and transparency around this entire process even though we are talking about taxpayer funded health services.

“The people of West Lancashire, who fund these services, deserve to know the truth from local health bosses on why they excluded the hospital trust and on what evidence was their decision based?

“I don’t believe that West Lancashire CCG have properly considered the impact of their decision on the future of the hospital, or perhaps they just don’t care!

“Throughout this process West Lancashire CCG have hidden behind commercial confidentiality to avoid answering questions and having their decisions scrutinised.

“Residents I have spoken to are disgusted by the plans to privatise NHS services.  They are asking who stands to benefit.  Residents are convinced it’s not them.”

On 25 February 2016 West Lancashire CCG announced that they had been liasing with potential providers interested in delivering some urgent care services (Ormskirk and Skelmersdale Walk-In centres, GP Out-of-Hours services and Acute Visiting Services.) and community health services (such as district nursing) from April 2017.

Since the February announcement, MP Rosie has been campaigning with local health activists in opposing the CCG’s decisions which will lead to privatisation of NHS services and damages to the future sustainability of Southport and Ormskirk hospitals

During this campaign residents have been able to sign an online 38 Degrees petition, received a leaflet through their doors and a street stall action day was held on 6 August in Ormskirk town centre.

Rosie has also raised her concerns with Health ministers and regulatory bodies calling for more scrutiny in this process of taxpayer-funded health services.

MP Rosie has repeatedly called for West Lancashire CCG to review their tender process and the exclusion of Southport and Ormskirk Hospital NHS Trust have been consistently rejected.