West Lancashire MP Rosie Cooper is continuing her campaign on Universal Credit to ensure constituents are not adversely affected over the Christmas period.

Skelmersdale is due to have full rollout of Universal Credit implemented in December, despite repeated criticisms and flaws having been identified in the system.

To add insult to injury, during the Budget speech last week, the Chancellor announced £1.5bn to assist people moving to the benefit, but this has angered many as changes will not benefit claimants until next year. 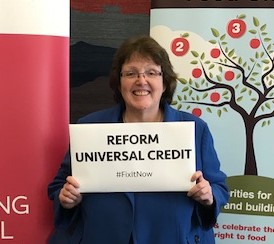 MP Rosie met with the local jobcentre manager, Amanda Jakeman, to discuss the impact the rollout of Universal Credit could have locally and to clarify ways Rosie can support residents who will be hit by that rollout.

Rosie Cooper MP said:
“The government cannot be under any illusion about the scale of the devastation the full rollout of Universal Credit could bring to families and communities across the country especially over the Christmas period, yet the Budget abjectly failed to deal with the many concerns raised.

“We hear the government talking about future changes, stating that claimants will only have to wait five weeks for payments instead of six. This is still far, far too long to have to wait for help to feed and house their families particularly over the Christmas and Winter period.

“The government has announced £1.5bn to support claimants, but won’t implement these changes to Universal Credit until next year. The system for claiming Universal Credit is an absolute shambles.

“I met with our local jobcentre manager Amanda Jakeman and I am assured that she and her staff are doing all they can to support claimants. I remain very concerned about the Government’s policy and the capacity to support all claimants effectively.

“According to the Government’s own figures, almost a quarter of claimants wait longer than six weeks for their payment. Some families wait 12 weeks or more, pushing many into rent arrears or a spiral of debt that is almost impossible to get out of, as their income under Universal Credit is too low to pay off the loan.

“I already have residents contacting me very concerned about what these changes mean to them and the fear and worry of six week waits for their entitlements, putting household budgets under tremendous strain as they struggle to feed their children or heat their homes.

“I know that some residents in West Lancashire have already had major issues with the pilot rollout, if that was replicated using the full rollout then that would be disastrous.”

MP Rosie recently signed a letter alongside 122 other MPs calling on the Department for Work and Pensions to halt the planned rollout of Universal Credit.

The letter to David Gauke, Secretary of State for Work and Pensions called for the delay in rolling out to 55 new areas each month, including Skelmersdale in December.

The pilot and early phases of Universal Credit have already brought misery to thousands of people across the country, with the continued rollout set to bring hardship and increased debt for millions of families.

The MPs pointed out how the complicated system of claiming is already struggling to cope with just five new areas a month having been rolled out earlier this year.

The MPs also pointed out that less than 40% of claimants register successfully with the government’s compulsory online portal, and that the phone ‘helpline’ is simply an automatic message, directing claimants to the website, so they can’t find out what is happening with their claim.

Citizens Advice have already called on the government to delay the programme in light of the evidence from the people they help, of whom over half had to borrow money whilst waiting for their first Universal Credit payment.

Councils and Landlords’ organisations have also called for the rollout to be delayed as over half of recipients of Universal Credit are in rent arrears. Many tenants are in danger of eviction and some landlords now refuse tenants who are on Universal Credit, making housing problems worse.

Any constituent who is concerned or struggling with Universal Credit is encouraged to contact Rosie Cooper MP on rosie@rosiecooper.net or 01695 570094.