West Lancashire MP Rosie Cooper joined Dr Hilary Jones of the School and Nursery Milk Alliance (SNMA) in the House of Commons to support a campaign to ensure that Brexit doesn’t imperil access to school milk.

Children over five can currently access subsidised milk through a scheme funded by the European Union -; with the UK receiving 4,219,008 of cash during 2017/18. The Department for the Environment, Food and Rural Affairs (Defra) has made some positive indications about the future of the scheme, but hasn’t committed to anything yet.

Parliamentarians came along to an event organised by the SNMA to enjoy some milk, learn about the health benefits, and show their support for a new scheme for children over five.

The SNMA also highlighted polling from ComRes which showed public widespread support for replacing the scheme. The polling found that 61% of people think that the Government should replace the milk subsidies schools currently receive from the EU with national funding.

Additionally, the polling found that:

Rosie Cooper MP said:
“It is vitally important that we all work to ensure the continuation of milk schemes to provide for our children in schools and nurseries here in West Lancashire and across the UK.

“Surveys show strong support from adults in the UK for provision of milk in schools, and so the government must take notice and commit to a solution.”

Dr Hilary Jones, Spokesperson for the School and Nursery Milk Alliance, said:
“Evidence demonstrates the positive benefits of milk in helping children to achieve a healthy weight as well as good oral health.

“With figures continuing to highlight the high levels of both obesity and tooth decay amongst children, it’s vital that the Government commits to replacing the EU School Milk Scheme after Brexit, and we welcome the recent commitment to consult on any future changes to the scheme.

“I’m delighted Rosie Cooper MP was able to join us to support our campaign.” 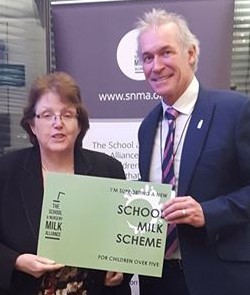 The School and Nursery Milk Alliance was formed in November 2011 to bring together key stakeholders in education, charity and dairy sectors to ensure the future of the existing school and nursery milk schemes, which have been a cornerstone of the education system since 1946.

The members of the School and Nursery Milk Alliance are trusted suppliers of milk to schools and nurseries, as well as dedicated companies who have involved in the implementation of milk schemes.